What are "Marine Protected Areas"? 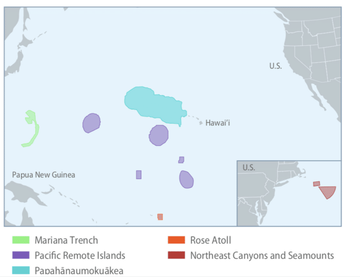 Marine protected areas (MPAs) are safehavens for sea creatures such as whales, sea turtles and seabirds. As caretakers of God's creation, we show reverence for special places marine life need -- not only to survive, but to thrive. "And God said, 'Let the water teem with living creatures, and let birds fly above the earth across the vault of the sky.' So God created the great creatures of the sea and every living thing with which the water teems and that moves about in it." (Genesis 1:20)

Marine monuments continue the bipartisan tradition of permanently protecting natural and historic treasures for the future. Since Congress passed the Antiquities Act in 1906, giving the President the authority to create national monuments on our public lands and waters, 16 Presidents – eight from each party – have used it to preserve special places. Protecting America’s public lands and waters remains popular among Americans across regions and political affiliations.
Download: Protecting & Restoring God's Marine Creation Resource

In 2016, faith communities celebrated the designation of the Northeast Canyons and Seamounts Marine National Monument, the first marine national monument in the U.S. Atlantic. Read the official September 15, 2016 Presidential Proclamation establishing it. Located 150 miles off the coast of Cape Cod, our first marine national monument in the Atlantic Ocean protects 4,900 square miles of God's marine creation, nearly the size of Connecticut. Without protection, the area would have been at risk of future damage from mounting offshore industrial activity -- including expansion of commercial fishing, drilling and mining.

In the News: Christian Leaders for Protecting the Northeastern Canyons and Seamounts

Under the Atlantic Ocean lie canyons as deep as the Grand Canyon and mounts higher than anything east of the Rockies. It is one of the most biodiverse areas in the Atlantic, where rare cold-water coral reefs more than a thousand years old make their home and nurture a myriad of species. Scientists are continuing to identify new species in this underwater ark for some of God’s most exotic and wondrous creatures. Here are a few of them.